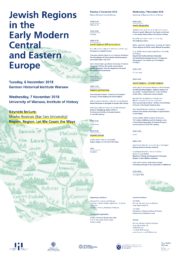 In recent years the regional perspective has gained more significance in historical research in early modern and modern periods. As a result of this shift regional studies have not only become a field for historians focusing on the description of “small homelands” but a tool for researching broad social and economic process.
The regional perspective is hardly ever used in early modern Jewish studies. It is obvious that traditional terms like “Ashkenaz”, “Sfarad” or “Polin” are not enough precise in order to adequately describe of the complex social, religion division of the Jewish community in the early modern period. For this kind of research concepts of national states and national borders are not fitting as well.
In our conference we would like to focus on the functioning of different Jewish regions in the East Central Europe in isolation from the traditional political borders. We understand Jewish region as an “area of action” created and performed by the Jews. Adopting this research perspective enables us speak about different issues of the Jewish historical experience. We are particularly interested in economic activity, religious movements, languages and literature, economic activity, book production and book market, the relations between different Jewish social groups, family – ties as well as local autonomic Jewish government. In our reflections and discussions special emphasis will be given on the following subjects:

The chronological framework comprises the late Middle Ages and the Early Modern Period. The geographical framework is the Polish – Lithuanian Commonwealth and the Holy Roman Empire and the Habsburg Empire.

Adam Kaźmierczyk, (Jagiellonian University of Kraków) The Jewish Poll Tax, the Jewish Local Councils and the Magnates. How the Magnates influenced the Jewish Self-Government.

Shaul Stampfer (Hebrew University of Jerusalem), Economy and the Building of Jewish Regions

Vladimir Lewin (Hebrew University of Jerusalem), Where is Jewish Lithuania? Lite, Raysin and Zamet on the Jewish Mental Map of the Eastern Europe.

Alicja Maślak – Maciejewska (Jagiellonian University of Kraków), Beyond the Partition Borders: Networks and Intellectual Exchange between „Progressive Synagogues” from Galicia and the Kingdom of Poland

Tomasz Wiślicz (Polish Academy of Sciences) “Sir” Zelman Wolfowicz and his Demesne: Jews in the Political Geography of Poland-Lithuanian Commonwealth in mid-18th Century

Institute of History University of Warsaw

„What is New, What is Next. Innovative Methods, New Sources and Paradigm Shifts in Jewish Studies”: zaproszenie